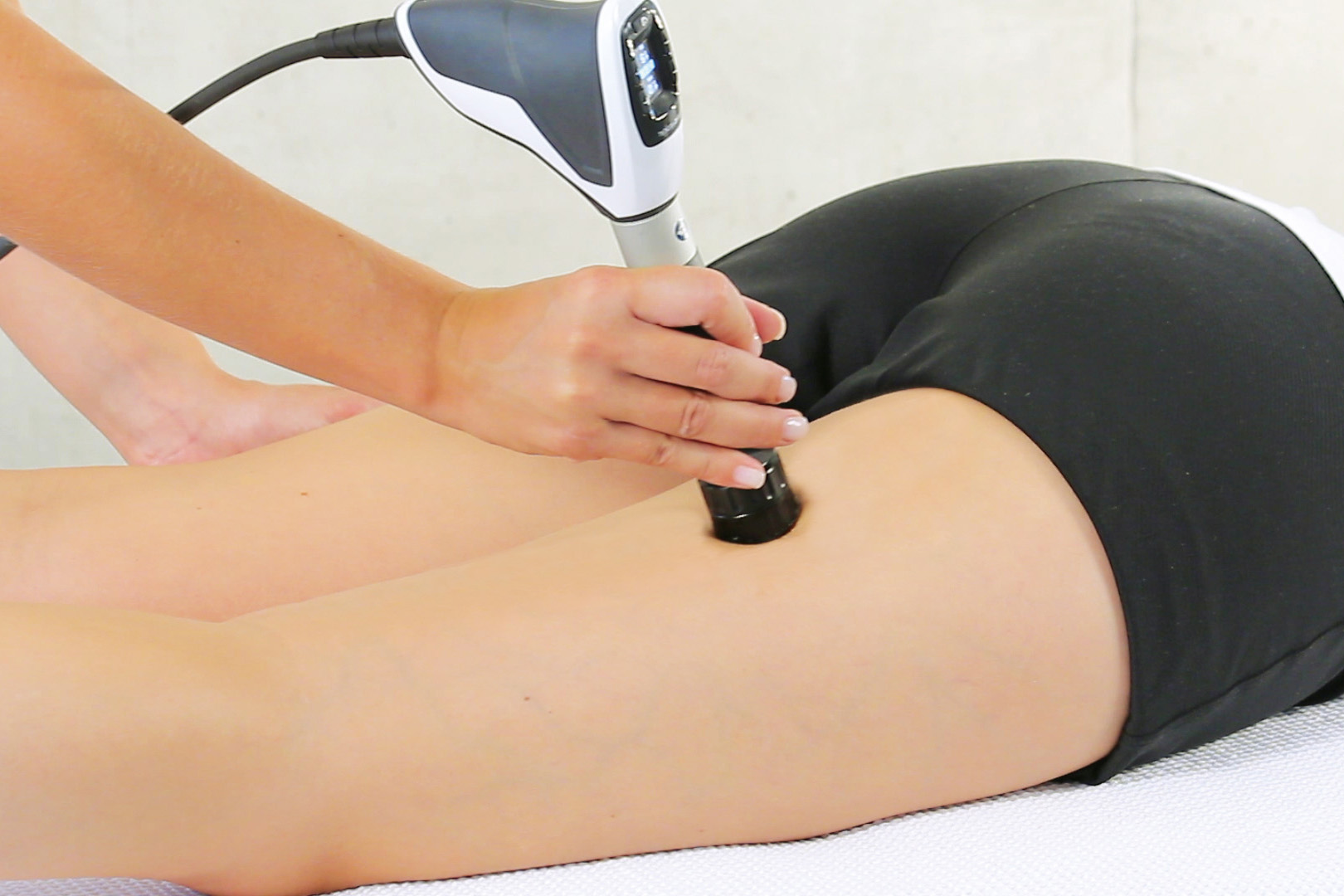 Shockwave therapy was used over 30 years ago, originally as an alternative to surgery for treating kidney stones and gallstones (lithotripsy).  The shockwave breaks up the stone, so the calcium deposits are passed out in the urine.  The effect of breaking up deposits was taken up by orthopaedic surgeons for conditions where calcium builds up within a tendon (calcific tendonitis).  This original type of shockwave was quite powerful and focussed the shockwave beam into the deep tissues, hence it was termed focused shockwave therapy (FSWT).  As interest in this method spread, the use of shockwave to treat general musculoskeletal conditions gained popularity and as the tissues treated with these conditions are closer to the body surface (superficial rather than deep, like the kidneys) a lower power shockwave was developed which was able to radiate through material to affect more tissue.  This newer treatment was called radial shockwave therapy, or more commonly extracorporeal shockwave therapy (ESWT) – extracorporeal meaning outside the body, and that is where the shockwaves are generated and transmitted into the body through the skin. 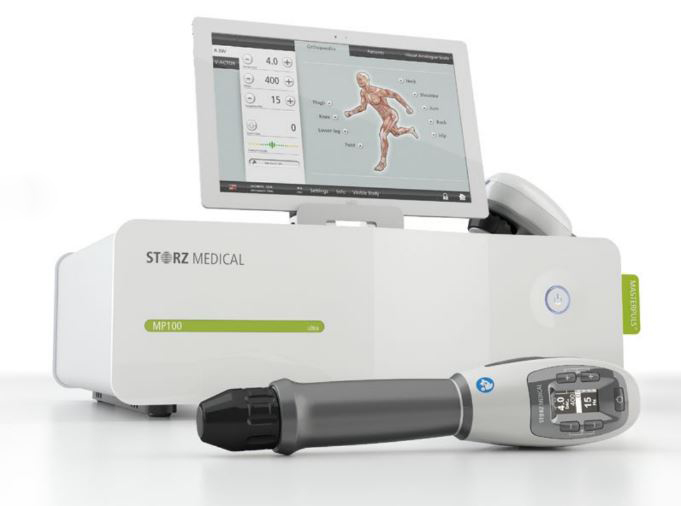 A shockwave is simply a pressure wave (a little like a soundwave) which occurs within a substance, such as air or water or materials which contain these.  An everyday example would be a sonic boom from an aircraft or a bow wave in front of a boat.  In each case as the object pushes forwards the material (air or water), is pushed out of the way.  In the case of ESWT the pressure wave occurs as a type of sound or acoustic wave.  The shockwave is almost like a controlled explosion and when the energy formed by this enters the tissue it will be changed or dissipated in some way.

For the technically minded, the pressure from shockwave varies depending on the setting selected, but can be up to 100-120MPa – which is about 15000 pounds per square inch!  However, this pressure is of very short duration (10 microseconds) and travels in a small (about 0.5 cm) beam.  The shocks are normally given between 800-2000 times taking about 10-15 minutes per treatment.  Typically, 3-7 sessions are required for peak therapeutic benefit, but this varies depending on the condition treated, and how individual patients react. 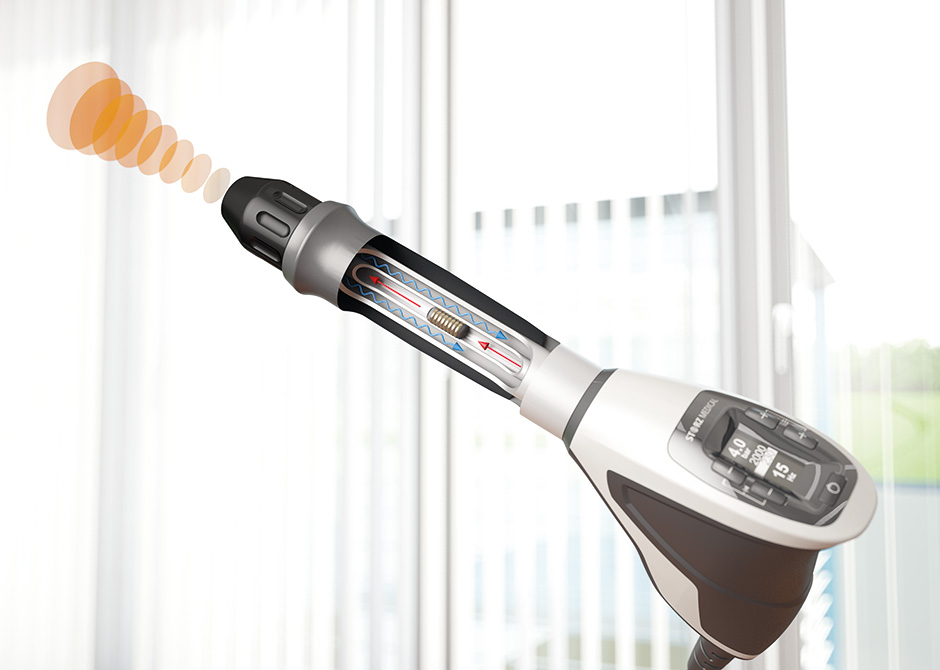 How does it work

The shockwave travels into the body tissues through the shockwave machines’ transducer or ‘head’ (fig) which touches the skin via a gel (contact medium).  The wave causes direct effects as it touches tissue and indirect effects after it has passed.  Cavities (bubbles) are produced in the liquid contained by the tissue and as these ‘pop’ cavitation occurs which does not damage the tissue, but speeds up its natural processes leading to cell repair and regeneration.  As the shockwave hits different surfaces within the body tissues, it is reflected and some of the energy dissipates causing therapeutic effects including –

Several conditions have been shown to be effectively treated by shockwave therapy, with high quality research studies to back up its usage.  Table 1 list some of the more commonly used treatment areas, and in general ESWT is very successful in treating chronic (longer lasting) injuries. 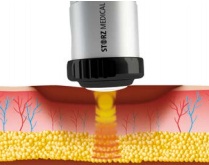 Prior to treatment a patient receives a full clinical examination as ESWT is generally used as part of a whole therapy package rather than in isolation.  Typically, patients can expect to receive instruction on therapeutic exercises which will form a progressive (gradually getting harder) rehabilitation programme used alongside ESWT.

The dosage to be applied is selected by the therapist.  Evidence based protocols for approved conditions are generally built into the computer based interface of the machine and stored as IPS (Individual Parameter Settings) codes.  Three variables are then selected, Pressure (given in ‘bars’ where 1 bar is equivalent to atmospheric pressure at sea level), Frequency (given in cycles per second or ‘Hz’), and Pulse number (total number of pulses in a single treatment or ‘n’). 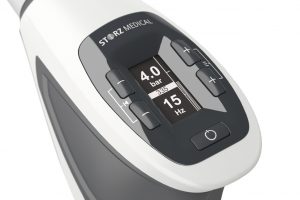 Treatment is given on bare skin with the area above and below the treatment site visible.  A contact medium (ultrasound gel) is placed on the skin and the ESWT machine head (transmitter) is pressed onto the skin.  Once the soundwaves are created a fast ‘bumping’ sensation is felt in the skin and a fast, rhythmic air like flutter is heard.  The machine transmitter is moved over the skin continually during treatment, creating a pleasant massaging or stroking feeling.  The sensation is firm and can sometimes feel a little sore.  In a few cases, the skin is left slightly pink and speckled (petechial discoloration) following treatment.  This typically wears off within 30 mins to 2 hours following treatment, and occurs mostly in those with lighter skin.

As with all medical treatments, knowing what can go wrong helps to make the treatment safer.  Shockwave is not given directly over lung tissue, but can be used in the thoracic spine.  Bone growth-plates in children are avoided, and the shockwave beam should not pass close to a foetus.  Patients who have a blood clotting disorder (haemophiliac) or who are on anticoagulants are treated with caution as marked skin reddening, or bruising may occur.  Although shockwave therapy is not used over tumours, there is a specialist use being developed to try to limit the spread of malignant tissue within oncology centres.  Finally, shockwave is not used directly over a cemented joint replacement, but as the beam is quite narrow this can be easily avoided.

Generally, the side effects of ESWT are mild and short lived (transient).  Sometimes there may be mild tingling and slight reddening of the skin, with a little soreness for a half day following treatment.  The therapy has been used extensively in hospitals, clinics, and especially within sport by top football clubs and at several Olympic games.

The therapy has been reviewed by NICE (National Institute for Health and Clinical Excellence) which has issued approved application guidelines.  The International Society for Medical Shockwave Therapy (ISMST) has issued a consensus statement on the indications and usage of shockwave.  It lists 46 conditions where research studies have shown shockwave to have approved indications, empirically tested uses, expert indication, and / or experimental evidence.