Yoga Bandhas – what are they and how do we use them 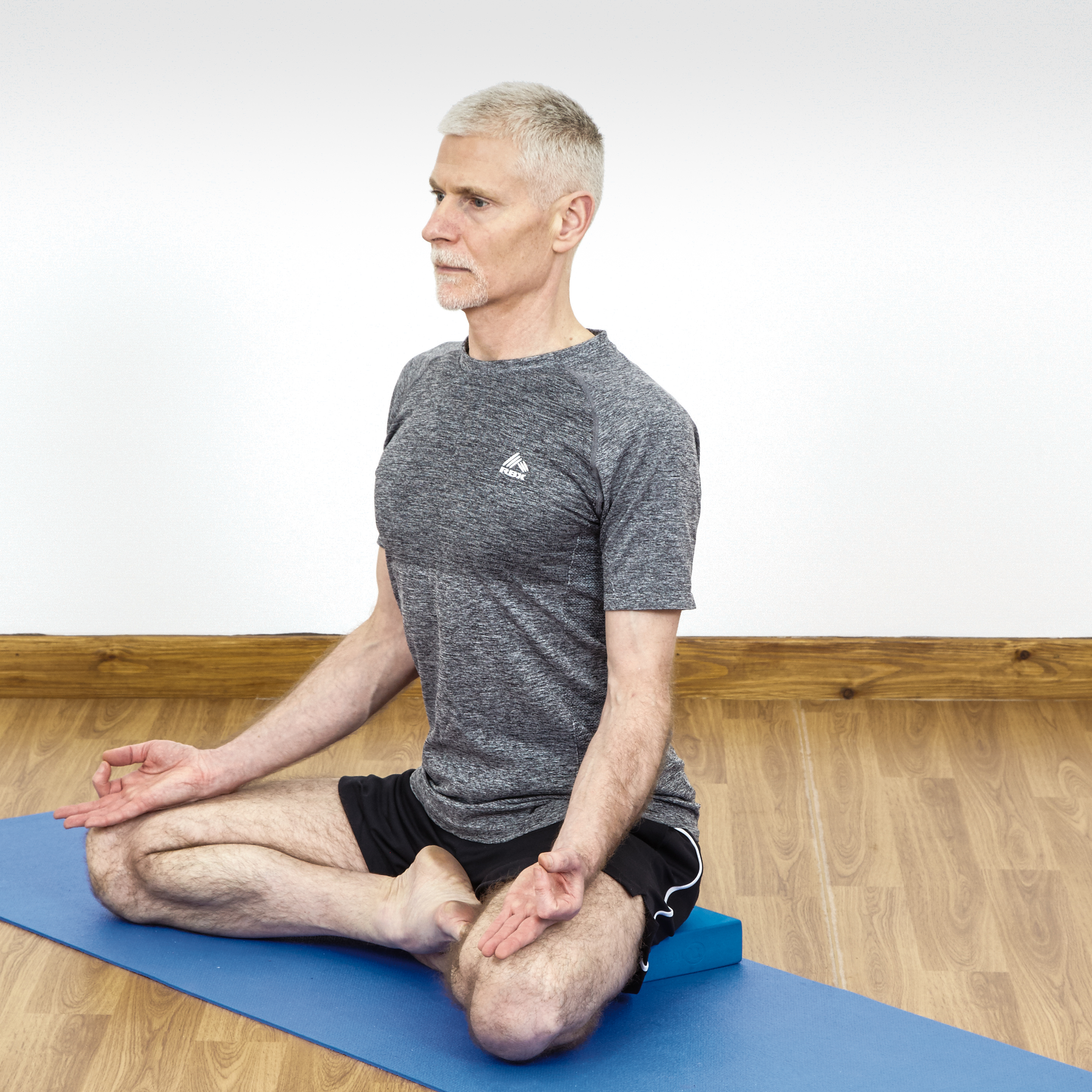 Yoga is becoming more and more popular nowadays, with classes available in most gyms and sports centres.  Styles vary, from traditional types focusing on postures, breathing, and meditation to more fitness based types designed to make you break out in a sweat.  Many tops sports teams use yoga now for its effect on flexibility, alignment, and body control.  Whichever style you do, the chance is that at sometime the work ‘Bandha’ will be mentioned.  Let’s have a look at this concept.

Bandhas are traditionally said to be energy locks capable to controlling and directing Prana or life force which circulates within the body.  The Bandhas are said to close off one part of the body and direct this energy to other parts, and are often used alongside Pranayama (yogic breathing).

Too understand the use of Bandhas we need to appreciate that in traditional yoga teaching Prana comes from food, air, sunlight, and water and is said to animate all matter, and to be a link between the physical body and the astral and causal bodies.  Prana is thought to exist as a positive energy which moves upwards, and a negative energy (apana) which  moves downwards.  The Prana is said to run in channels called nadis (similar to the meridians of Chinese medicine).  The large central nadis (Sushumna) corresponds to the spinal cord and either side are two smaller channels (Ida and Pingala) which correspond to the autonomic nervous system.  The chakras are located along the Sushumna, from the perineum (groin) to the crown of the head.

Mula Blanda or ‘root lock’ is said to affect the root Chakra (Muladhara Chakra) close to the perineum.  To activate the Mula Bhanda, the student contracts the Pelvic floor muscles by drawing the perineum in and up slightly tightening around the anus, sexual organ, and navel.  The action should be a slow squeeze rather than a forceful pull.  In Pilates a visualisation of the ‘pelvic elevator’ is useful.  Here, the student imagines an elevator shaft within the lower abdomen.  Contracting the pelvic floor raises the elevator in the shaft, with a maximum contraction lifting it to the tenth floor.  The aim is to lift the elevator to the second or third floor, but certainly not more than half way.  This equates with about 20-30% maximum voluntary contraction (MVC) of the muscles which has been shown to favour the stabilising muscles which have a higher concentration of slow fibres and are involved in endurance actions (holding).  Traditionally Mula Bandhas is practiced in Siddhasana (perfect pose) where the heel presses into the perineum, and this Bandhas is said to prevent apana from flowing downwards.  In modern usage, contraction and control of the pelvic floor is important for both males and females.  In males pelvic floor contraction is associated with continence and maintenance of erection, both conditions which are important in senior students who may have undergone prostate or hernia surgery.  In females pelvic floor contraction is especially important following childbirth where regaining strength, endurance, and control of the muscles is vital to continence.  People are often embarrassed about performing pelvic floor contractions, and can fail to perform them over a sufficiently long period to have a muscle adaptation effect.  Practicing Mula Bandha as part of a yoga class gives them the ideal vehicle to maintain pelvic floor health.

In modern usage, contraction and control of the pelvic floor is important for both males and females 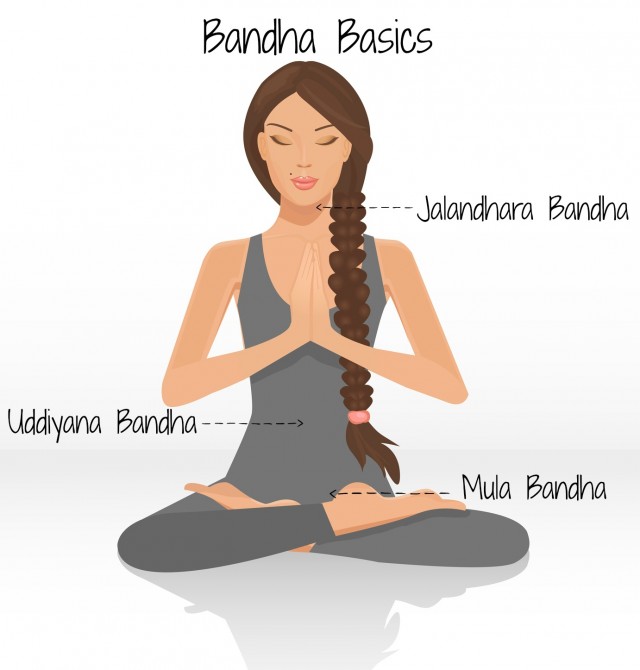 Uddyana Bandha or ‘abdominal lock’ is an inward pull of the abdominal wall, commonly called abdominal hollowing.  Traditionally the full effect is gained by exhaling fully, holding the outbreath and then drawing the abdomen in (abdominal hollowing) and up (diaphragm raises) to create a vacuum effect in the abdomen.  The full lock may be practiced standing with the feet apart and knees bent, leaning forwards to place the hands on the knees and pressing the hands downwards slightly as the abdomen is pulled inwards.  A milder effect may be used during asana practice by timing an abdominal hollowing action to expiration.  This results in an increase in intra-abdominal pressure (IAP) which has been shown to reduce compression and shear loading on the lumbar spine.  This action in itself is useful to build core stability, but practiced within a general yoga class gives students the opportunity of quickly switch on (recruit) the core stabilising mechanism, a skill which is important to manual handling tasks in daily living.  Traditionally this Bandha is said to encourage prana to flow up to the crown chakra.

Jalandhara Bandha or ‘chin lock’ is traditionally used at the end of exhalation when the breath is held in Pranayama.  Chin lock is best practiced in cross legged sitting with the hands resting on the knees and spine upright.  The chin is drawn inwards (cervical retraction) and downwards (cervical flexion) to lower the chin towards the notch at the top of the breastbone.  The top of the neck should lift upwards to encourage lengthening through the spine.  Commonly people spend a lot of time in front of computer which presses the chin forwards (protraction) and shortens the neck, compressing the delicate neck tissues causing pain and tension headaches.  The action of ‘chin lock’ opens the top part of the neck (sub occipital regaion) relieving tension.  Traditionally this Bandha is said to prevent prana flowing downwards.

All three locks may be combined into Maha Bandha or ‘Great lock’ an advanced technique typically practiced as part of supervised pranayama.  Following several full breaths the student exhales fully and applies root lock, then abdominal lock and finally chin lock.  The outbreath is held before the student raises the head, and inhales to release all locks and breathe normally.  Maha Bandha is said to stimulate all the Chakras and benefit the whole body. 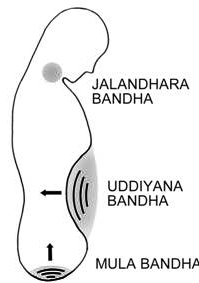 Individual bandhas may be used in isolation or combined during many yoga poses and breathing exercises.  Begin gently, tightening the target muscles and holding for short periods only.  Ask your yoga teaching for instruction on these useful techniques.