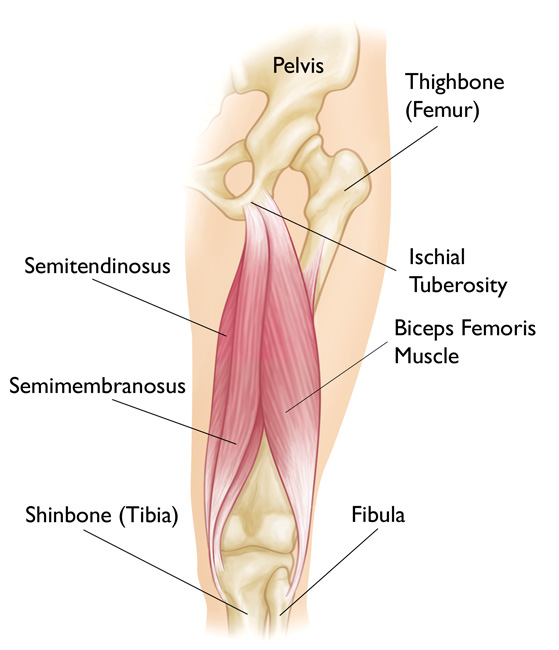 Hamstring injury is common in sport, and these injuries frequently recur.  Up to 12% of sports injuries may be to the hamstrings (Ekstrand et al 2011), and it is the  most common muscle injury in male footballers (Schuermans et al 2014).  Recurrence rates vary between 12-63% depending on the site of injury and severity, and the first month after return to sport sees the greatest risk of re-injury (Brukner et al 2014).  High class rehabilitation is key for hamstring injury recovery.

The hamstrings consist of three muscles, the biceps femoris (BF) laterally, and the semimembranosus (SM) and semitendinosus (ST) medially.  The BF is more commonly injured than the ST and SM with rates of of 80% compared to 10% respectively (Ekstrand et al 2012).  The ischial portion (vertical fibres) of adductor magnus is sometimes considered within the hamstring group, and involvement of his muscle is sometimes seen alongside hamstring injury (Askling et al 2007).  The anatomy of this region is an important factor in the varying injury incidence between the various hamstring components.

The three hamstring muscles attach to the ischial tuberosity – the SM from the superior-lateral aspect, the ST and BF from the infero-medial portion below the sacrotuberous ligament.  The ST and long head of BF have a combined attachment on the lower medial facet of the ischial tuberosity, the two muscles travelling together for a short distance until they form fusiform muscle bellies. The ST almost instantly forms into a long slender tendon, and travels around the medial condyle of the tibia to attach to the medial surface of the tibia below gracilis. The BF has two proximal attachments; the long head, as described above, and the short head from the lower linea aspera of the femur. The muscle swings downwards and laterally across the posterior aspect of the thigh and around the lateral ligament to insert into the head of the fibula.   From this point it has a strong fascial attachment to the peroneus (fibularis) longus and the iliotibial band as part of the lateral and spiral fascial lines (Myers 2014).

The hamstrings as a group are innovated by the sciatic nerve (tibial branch), but the BF has a dual innervation (tibial and peroneal branch), and asynchronous stimulation of the two heads has been described as a factor in injury (Burkett, 1975). The SM comes from the lateral facet of the ischial tuberosity and travels down and medially, becoming flattened and broader as it does so. The SM is deep to both the ST and BF, and divides into five components when it reaches the knee. The principal insertion is to the posterior aspect of the medial tibial tubercle, with attachment into the oblique popliteal ligament and medial meniscus.

The proximal tendon of the BF extends into the muscle by 60% of its length, and the distal tendon by 66%, while for the SM the tendon extension is 78% and 52% (Garrett et al 1989).  The continuity between the two tendons  into the centre of the muscle constitutes the central tendon (intramuscular myotendon) which is often a region of disruption in persistent injuries (Brukner and Connell 2016).

The hamstrings have functions over the pelvis, hip, and knee.  They are two-joint (biarticular) muscles, and as with all muscles contribute force through active (contraction) and passive (recoil) means.   In  open chain motion the muscles will flex the knee and extend the hip, but the short head of BF has an action (flexion) over the knee alone.  When the knee is flexed, SM and ST medially rotate the tibia and the BF laterally rotates.  In closed chain action the hamstrings will assist in knee extension by drawing the femur into extension over the fixed foot.

Biarticular muscles are arranged as agonist and antagonist, in the case of the thigh, the hamstrings being grouped opposite the rectus femoris.  Because both biarticular muscle sets are not long enough to permit movement at both joints simultaneously, the tension in one muscle is transferred to the other. Using the hip as an example, as the hamstrings contract to extend the hip, passive tension is transmitted to the rectus femoris creating a knee extension force. This type of action, involving either extension or flexion at both joints at the same time, is called concurrent movement. The muscle shortens at one end but lengthens at the other, and so maintains its length with a range of 100-130% resting length to conserve tension (Burkholder and Lieber 2001). When the hip is flexed but the knee extended, the rectus femoris is shortened and rapidly loses tension, while the hamstrings are lengthened and rapidly gain tension, an example of countercurrent movement (Rasch, 1989).

Two-joint muscles provide a number of mechanical advantages over monoarticular equivalents. Firstly, they couple movement at both joints. For example, in the upper limb shoulder and elbow flexion occur together in a feeding pattern, and both actions have a contribution from biceps brachii (Enoka 1994). Biarticular muscles also allow the transfer of power from proximal to distal segments (Lichtwark and Wilson, 2006), allowing bulky musculature to be kept closer to the trunk, reducing the mass of the extremity and facilitating acceleration.

Thirdly, two-joint muscles are said to redistribute muscle force throughout the limb (Toussaint et al., 1992). For example, if hip flexion is performed by rectus femoris, recoil of the lengthening hamstrings will tend to flex the knee.   Equally recoil of the lengthening rectus femoris in hip extension will tend to extend the knee.  A biarticular muscle will also enhance joint stability by allowing co-contraction of the agonist and antagonist muscles  without reducing tension as would occur with monoarticular muscles at both joints.

The hamstrings, as biarticular muscles,  have an important functions during both running and lifting type actions.

The hamstrings, as biarticular muscles,  have an important functions during both running and lifting type actions.

Forward bending is a coupled movement combining lumbar flexion and pelvic rotation (lumbar-pelvic rhythm), which results from a coordinated action between the back extensor muscles (erector spinae) and the hip extensors (gluteals and hamstrings).  Towards end range forward bending both the back extensor muscles and the hip extensors show reduced electrical activity, a phenomenon called the flexion relaxation response (FRR).  As the body bends forwards, its decent is initially controlled by eccentric action of both the spinal extensors and hamstrings, but towards the end of mid-range activity of the spinal extensors ceases and elastic resistance of the spinal extensors and posteriorly placed spinal soft tissues limits movement range (Kippers and Parker 1984).  Near end range activity of the hamstrings also ceases and the final angle of pelvic tilt is limited by elastic resistance of these muscles and tension of other posteriorly placed soft tissues.  At the initiation of body lifting, little muscle contraction is seen, the trunk being raised by elastic recoil of the posterior tissues.  The point at which this occurs (critical point) varies, and the FRR of both the erector spinae and hamstrings may be altered or obliterated in subjects with chronic low back pain (CLBP), perhaps representing an inability to relax the muscles as part of painful behaviour.   EMG biofeedback training has been used to decrease lumbar paraspinal muscle activity and increase motion range in patients with chronic low back pain.  In this study a decreased fear of movement was noted leading the authors to suggest that initial movement limitation may have been modulated by fear avoidance (Pagé et al 2015).  Surface EMG has also successfully been used to assist a home based stretching programme aimed at lengthening the paraspinal muscles in CLBP subjects (Moore et al 2015), again suggesting that increased tone in these muscles may be part of the pain phenomenon of CLBP.

There are a number of important considerations with respect to injury recovery and rehabilitation with the bending action.  Firstly the lumbar spine and pelvis have to work in a coordinated fashion, and following injury this coordination often breaks down and must be retrained.  Secondly, whilst both the back muscles and hamstrings must be strong enough to lift a subjects own bodyweight and the weight of any object being held (these muscles often weaken after injury) they must also be able to relax at the right point when bending.  If they stay active throughout the bending action, without switching off, they will tire and become painful.

During the running cycle, the hamstrings contract eccentrically to decelerate the leg in late forward swing, an action which also helps to stabilize the knee. During the support phase, the hamstrings act concentrically to extend the hip, and continue to stabilize the knee by preventing knee extension. During push- off, the hamstrings and gastrocnemius, both biarticular muscles, paradoxically extend the knee.   EMG studies have demonstrated differences between the medial and lateral hamstrings during knee flexion (isokinetic dynamometry) with BF showing maximal activation early on (15-30°) and SM and ST later (90-105°) in knee flexion (Onishi et al 2002).  BF is subjected to  the greatest muscle-tendon stretch in the terminal swing phase of high speed running, perhaps explaining the increased incidence of injury to this muscle.   BF and ST  are maximally active eccentrically throughout the swing phase of running, but their neuromuscular coordination patterns show BF more active in the middle to late swing and ST in the terminal swing phase only (Higashihara et al 2010).  It has been suggested that a reduced endurance capacity of the ST is compensated by increased activity of the BF, as muscle functional MRI (mfMRI) has shown increased metabolic activity in the ST compared to BF following injury (Schuermans et al 2014).

The injuries may be classified according to the Munich consensus statement (Ueblacker et al 2013).  Muscle injury may be direct or indirect, and graded from 1-4.  Grades 1 and 2 are functional muscle disorders due to overexertion and / or fatigue, with grade 2 representing delayed onset muscle soreness (DOMS) or MRI negative injury resulting from referred posterior thigh pain.   Grade 3 injury is a minor or partial tear, while grade 4 is a total or complete tear or avulsion.  Grades 3 and 4 represent structural injuries (table).

Recovery from injury and return to the activities of daily living (ADL) or return to play (RTP) may partially be determined by the site of injury and the amount of tissue damage.  However, while studies suggest that closer proximity to the ischial tuberosity is likely to imply greater recovery time (Askling et al 2013, Slider et al 2013), MRI and US studies show no association between scan findings and RTP (Reurink et al 2015, Petersen et al 2014).  RTP before full  rehabilitation has taken effect can be an important factor in re-injury.  Reduction of eccentric strength and delayed rate of torque development  may suggest neural function change following injury, especially at longer muscle lengths (Fyfe et al 2013).  Pain inhibition following injury may produce a structural and functional maladaptation within the muscle, meaning that early pain management may be important to reduce inhibition and encourage early muscle activation (Brukner 2015).

See part 2 for treatment and rehabilitation