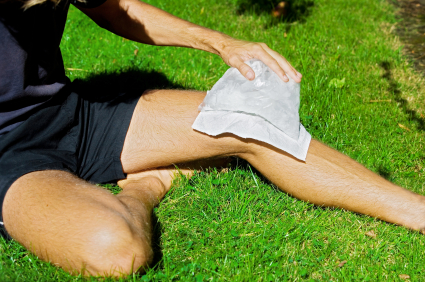 We all know the situation.  Training is going well, and suddenly you trip over a tree root when out running and twist your ankle, or pull something in the gym.  The action you take next is important, because it can dictate how long you are away from sport.  You will get lots of advice from well-meaning team mates – ‘run it off’, ‘use ice spray’, ‘put a packet of frozen peas on it’, – but let’s take a look at some science and see if we can come up with the best sports injuries self treatment.  The early management of sports injuries (soft tissue injuries) has for many years been summarized in simple pneumonics.  However, as scientific evidence has changed over the years, so have the letters used in the pneumonics.

Initially in the 1970’s ICE was used, standing for Ice, Compression, and Elevation.  The original idea was to limit tissue damage by slowing the metabolic rate of the tissues, and reduce the spread of swelling into the surrounding area which would eventually clot and potentially lead to adhesions.  Studies showed decreased cell metabolism, changes in white blood cell activity and a reduction in both cell death due to trauma (necrosis) and ordered cell death (apoptosis)(Bleakley et al 2012).  For every 10°C drop in temperature, chemical reactions are said to reduce by two or three times (Van’t Hoff’s law).   The evidence for these changes in tissue however was based on early animal studies where cooling was much greater than that used in humans, and was applied for a greater time.  Local temperature reduction to  10°C were reported using hamsters cooled for 60-180 minutes over a dorsal skinfold (Westermann et al 1999).  The effect of cold application is offset by the thickness of the subcutaneous fat layer which is much thicker in humans than in the mammals used in the original studies.  Using crushed ice application for 20 mins on humans intramuscular temperature, measured at 1cm and 3cm depth in the medial calf, has been shown to reduce to a maximum low of 21°C (Myrer et al 2001) considerably higher than that found in animal studies.  In addition the depth of the injury is of relevance.  A 1 cm increase is tissue depth has been claimed to reduce the rate at which tissue cools from 0.72 to 0.45°C per minute (Myrer et al 2001), meaning that ice application would have to be left for far longer on deeper tissues.  A deep tear of the quadriceps for example may be 3-4cms below the skin surface in an athlete, so a brief ice application is unlikely to record clinically significant tissue temperature reductions.

Ice is still useful, but nowadays it is effects are more for pain relief than to limit ongoing tissue degradation.  Local cold induced analgesia requires a reduction of temperature to 13°C, but of the skin surface, not the deep tissues.  Temperature reduction to this level is achieved within 5-15 mins of cooling and is more consistently applied using crushed ice / ice cubes in a bag which will adapt to the limb contour and remain at 0°C throughout treatment.  Caution should be used with commercially available ice packs as the temperature applied may vary and sometimes cooling may be greater than 0°C.

Local cold induced analgesia requires a reduction of temperature to 13°C, but of the skin surface, not the deep tissues

Practically, ice, or cold application, should be applied using crushed ice in a wet cloth bag (wrapped in a teacloth or thin towel for example) to act as a protective barrier.  If a commercial ice pack is used it should again be wrapped in a damp cloth to prevent ice burn to the skin.  Damp cloth will conduct the cooling effect from the ice to the skin, but dry cloth will reduce the cooling effect before it is saturated by melting ice.  The pack should be left on for at least 10 mins, but no more than 30 mins, and symptoms should be monitored for pain relief.  Ice can be reapplied every 2 hours to maximise the analgesic effect.  If no ice is available, cold water is of use, but the tissue temperature changes are not as great as with ice, and so cold analgesia will be lessened. 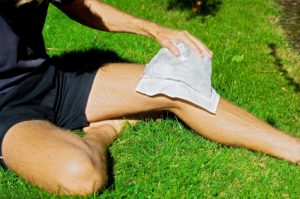 Following soft tissue injury, fluid (swelling / oedema) may accumulate as a result of changes to pressure balance between the tissue in relation to that of the blood vessels (interstitial and osmotic pressure).  These changes occur due to local blood vessel damage and the release of blood products into the surrounding tissues which in turn changes blood viscosity (fluid stiffness).  Elevating the lower limb decreases the effect of gravity and minimises swelling and the pooling of fluid around the ankle after a sprain for example.  The reduction in tissue pressure can result in a parallel reduction in pain, but when the limb is taken into a normal standing position a rebound effect may occur increasing pain once more.  This effect is reduced by allowing the subject to return the limb from elevated to dependant gradually.  Applying compression may reduce this effect, however the amount of compression is unclear.  A study applying 80mmHg pressure was unable to demonstrate a prevention of swelling, but lower pressure of 15 and 35mmHg have been shown to at least lessen fluid pooling (ACSEM 2010).  It is likely that the effect of compression will be dependent on a number of factors including injury type, tissue depth, body part, stage of healing and body resting position.  Rather than set time protocols, patient assessment (pain and swelling) should be made to monitor symptom modification and assess treatment outcome.

Compression is best applied contouring the limb (elastic tubular bandage for example).  Intermittent compression through the application of electrically pumped garments (compression boot) is useful as is graduated compression which applies a distal to proximal force.  Limb circulation should be monitored while compression is on, with distal skin coloration and return of blood to the nail bed (squeeze the nail until it goes white and ensure normal pink colouration returns upon release) being practical forms of assessment.

Elevation should be above the level of the heart, so for lower limb injuries the athlete should lie on the floor or bed with the leg up on a bench or stool.  If this is not available, a kit bag may suffice.  Symptoms should be monitored, with a greater angle of elevation and longer time period likely required for more distal (ankle) than proximal (knee or thigh) injuries.

The ICE pneumonic was replaced by RICE to emphasise the importance of using inactivity (Rest) to prevent further tissue damage.  Unloading damaged tissue (by avoiding movements which replicate the injury force) in the acute phase of an injury to minimise bleeding and prevent re-injury is important.  However, the advice on how this is achieved has changed over the years.  Total immobilisation (limb cast) will result in joint stiffness and change the morphological properties of the healing tissue and should be restricted to bone injury or complete rupture where minimal movement would be delirious.  Protecting the area by using a support which allows some movement (functional bracing), or simply allowing the athlete to perform restricted activity is likely to improve the quality of the healing tissue, and so the pneumonic PRICE came into usage.  As an example, following acute ankle sprain mobilising with an external support gives a superior result to cast immobilisation.  In a systematic review of 9 RCT’s, return to pre-injury fitness, re-injury rate and subjective ankle stability have all been shown to be superior with early immobilisation  (Jones and Amendola 2007). 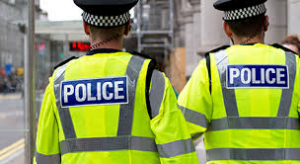 Limited mechanical loading of tissue has been shown to upregulate gene expression of  important proteins in tendon healing for example, and mechanotransduction which results from movement may enhance the healing process.  For an explanation of mechanotransduction click here.  The transition from rest & protection must be closely monitored by assessment of patient symptoms.  Loading damaged tissue may be both negative or positive.  Further injury may result if loading is excessive, and few positive tissue changes may occur if loading is too light.  The requirement for optimal loading has led the use of the latest pneumonic POLICE, standing for protection, optimal loading, ice, compression and elevation.

Loading damaged tissue may be both negative or positive.

Optimal loading has been defined as “the load applied to structures that maximises physiological adaptation” (Glasgow et al 2015).    Some of the aims of applying optimal loading are to change collagen reorganisation and improve tensile strength, increase stiffness of the muscle-tendon unit, or improve motor (neural) control.  The mechanism through which this is achieved have been summarised by Glasgow et al (2015) as shown in figure 1.  Variation in both load magnitude and timing of application can have significant effects on tissue recovery.  Moderate loads (55% MVC) on tendon have failed to increase tissue stiffness while near maximal loads (90% MVC) increase tendon stiffness and elasticity, and result in tendon hypertrophy.  These results indicate that a  threshold may exist for a mechanical stimuli to produce mechanotransduction (Arampatzis et al 2007).   Similarly high impact actions produce a greater stimulus to increase bone mineral density (BMD) than slow actions, especially in the hip (Zhao et al 2014). 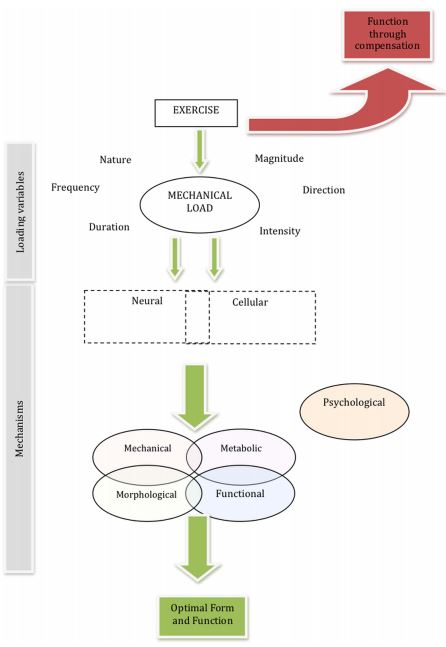 Optimal loading must address both the mechanical properties of the affected tissues and the central nervous system (CNS), to challenge the complete neuromusculoskeletal system.  Rather than simply increasing load on tissues we are seeking to increase variation in movement to encourage tissue adaptation in parallel with changes to motor control, and Glasgow et al (2015) cite three categories in which load may be varied.  To reduce repetitive loading, magnitude, direction and rate of loading should be varied.  Secondly stimulation of the mechanotransduction effect may be enhanced by varying loading to prevent accommodation to stimuli, where the body simply gets used to a stimulus and it no longer has an effect.  Finally, variable tensile, compressive and torsional forces may build a stronger biological scaffold which creates tissue resilience equipped to withstand and wider range of loading. 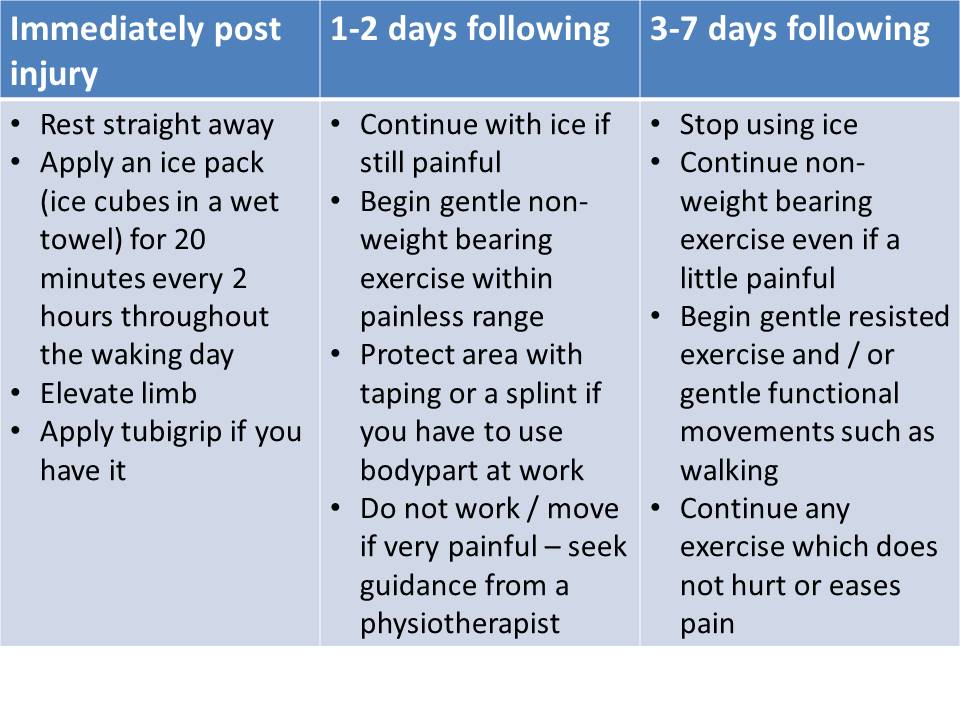